What will bring tears to the eyes of grown men - Follow on with what this tool will do. I recommend the video clip.

The elastrator -  a device for the castration and docking of livestock.

The whole device has a surgical look to it, bright chrome finish, enough to make you shiver.
Visit http://en.wikipedia.org/wiki/Elastration for a description of the process.

Here it is though
The elastrator - with rubber rings 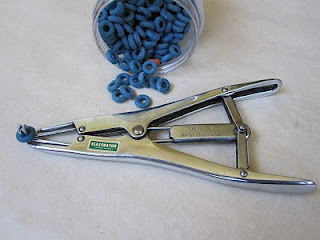 Ring applied to the prongs 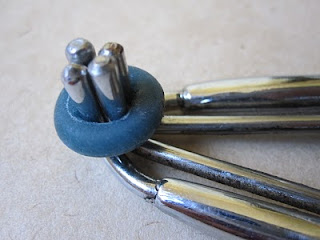 Ring pulled open by the four prongs. The 2 bottom one are pulled down by the centre post 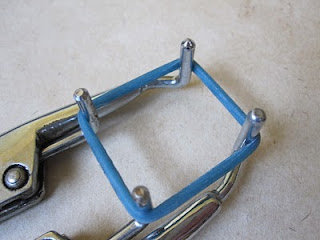 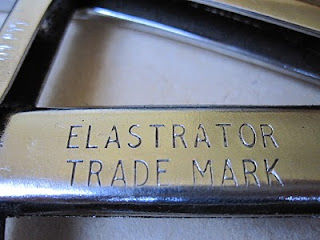 Now for the real gem The video clip: enjoy 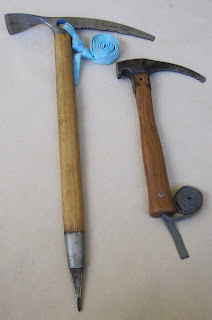 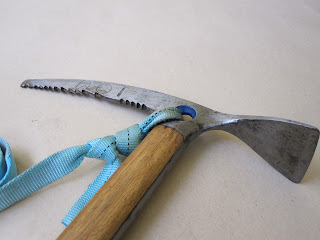 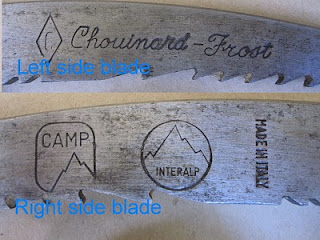 Riveting detail on the handle 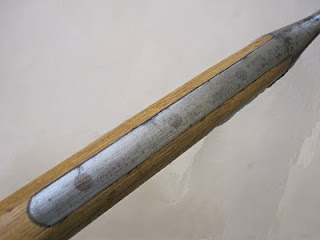 Alpine hammer
By 1972 Chouinard had produced 3 hammers, the Yosemite, Alpine and Crag
Chouinard first produced the Yosemite hammer in 1966. This hammer had a big blunt pick for removing pitons from rock cracks.  The Alpine hammer (below) was first produced in 1967. Its special design feature was the long, narrow dropped pick with notches at the tip. This was for use as an ice dagger on hard water ice. The Crag hammer was produced in 1972. It was lighter than the Yosemite hammer and had a long thin blunt pick. It was designed strictly for free climbing. (1972 Catalogue)

This hammer pictured would be an Alpine hammer. There were many versions of the hammer. The notch and the 4 teeth are indicative of the 1973 version. There is a good message (#80 CHOUINARD ALPINE HAMMER HISTORY - WOOD HANDLES) at http://www.supertopo.com/climbing/thread.php?topic_id=762638&tn=80 which details the various styles and dates the hammers were made. 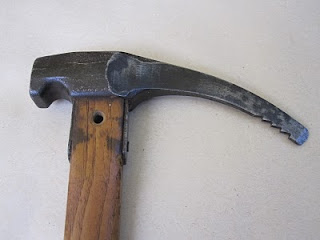 The hammer was marked on the handle with the C in the diamond symbol then "Chouinard over Made in USA" to the right. The markings on this hammer have been worn down from use but can still just be made out. 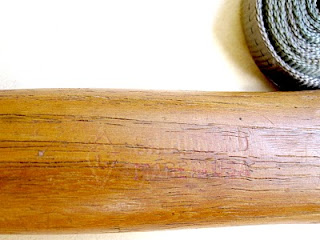 The head of the hammer is held on by two metal plates riveted through the handle.
(The hole in the handle is not original.) 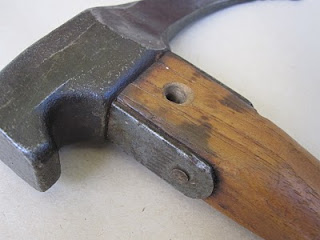 A metal wedge is also driven into the handle as well as the hooks for the metal plates. 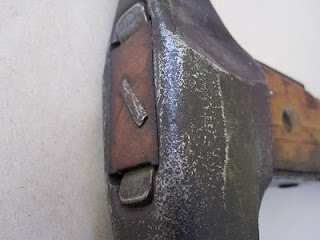 Reference
http://www.climbaz.com/chouinard72/chouinard.html This catalogue has a history of Chouinard gear. It also has articles on the introduction of free climbing techniques.
I have also found a podcast Yvon Chouinard: A Reluctant Businessman where Yvon Chouinard recounts his young life, including his start as an innovator and an entrepreneur in the climbing business. This was part of the "Yvon Chouinard Winter 2011 Oppenheim Lecture" at UCLA in February 2011
Also found this article The Craftsman, Four routes, four lessons from Yvon Chouinard which gives some Yvon history and 4 climbs
Also see my other blog for - Ice axe - Himalya-Pickel, Modell, Kuno Rainer
Posted by Barry at 2:19 AM No comments: